Message from the Director General of Police, U.T Chandigarh 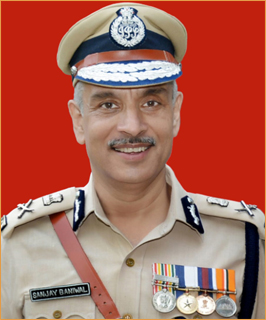 Chandigarh being the capital of Punjab and Haryana, is one of the fastest-growing cities, which has witnessed an unprecedented growth of both human and vehicular population over the years. Besides, Chandigarh has become an important centre of political, cultural, commercial and trading activities. All the events happening abroad or in any part of the country, have a conspicuous bearing on the situation in the capital, which is reflected in the traffic scenario of the city. Today,spreading over an area of 144 sq. kms, the Union Territory of Chandigarh has a population of more than 13 Lakh. It is the first planned city in India and is a gateway to three important States i.e. Punjab, Himachal Pradesh and the erstwhile Jammu & Kashmir. The city has the administrative Headquarters of Punjab, Haryana and Union Territory, Chandigarh. The premises of the Punjab and Haryana High Court, the Punjab and Haryana Vidhan Sabha building, Civil Secretariats of Punjab and Haryana and the Open Hand monumentall together known as the ‘Capitol Complex’, have been declared as a World Heritage Site by UNESCO. A large number of important government offices, educational institutions and vital installations are located in Chandigarh.Several diplomatic missions are also situated in the city of Chandigarh.

Taken together, traffic management in Chandigarh is a herculean task for Chandigarh Traffic Police. This task has become increasingly difficult due to the mixed traffic on the roads, tremendous growth of the city, erratic behaviour of road users, shortage of parking spaces, not very satisfactory road conditions, etc. The city needs to have a holistic traffic and transportation system, relying more on an efficient, affordable and interlinked public transport system than on burgeoning private vehicles of mixed varieties. However, till the time it becomes a reality, the traffic police is faced with the challenge of regulating traffic and ensuring the safety of all road users against all odds.

Despite these constraints, Chandigarh Traffic Police is sincerely and diligently engaged in the task of managing the traffic, its smooth and safe movement on all roads of this capital city. The Traffic Police, despite the crunch of manpower and surmounting problems in the city, has been managing the traffic of the city with highest professionalism and competence. The success of Chandigarh Traffic Police alongside its endeavour, depends largely upon the wilful support of all road users. Nevertheless, the Traffic Police is embarking on latest and modern technology available in the world in the field of traffic management to achieve the mission and objectives set for itself.

The services provided by Chandigarh Traffic Police would go a long way in building strong police-public relationship and to keep the public informed and updated on vital traffic issues. I solicit the co-operation of all road users in Chandigarh to adopt a culture of road safety and give us useful suggestions.

I reiterate that Chandigarh Police will leave no stone unturned in its endeavour to make the “CITY BEAUTIFUL” - a very safe and secure place for everyone. JAI HIND!